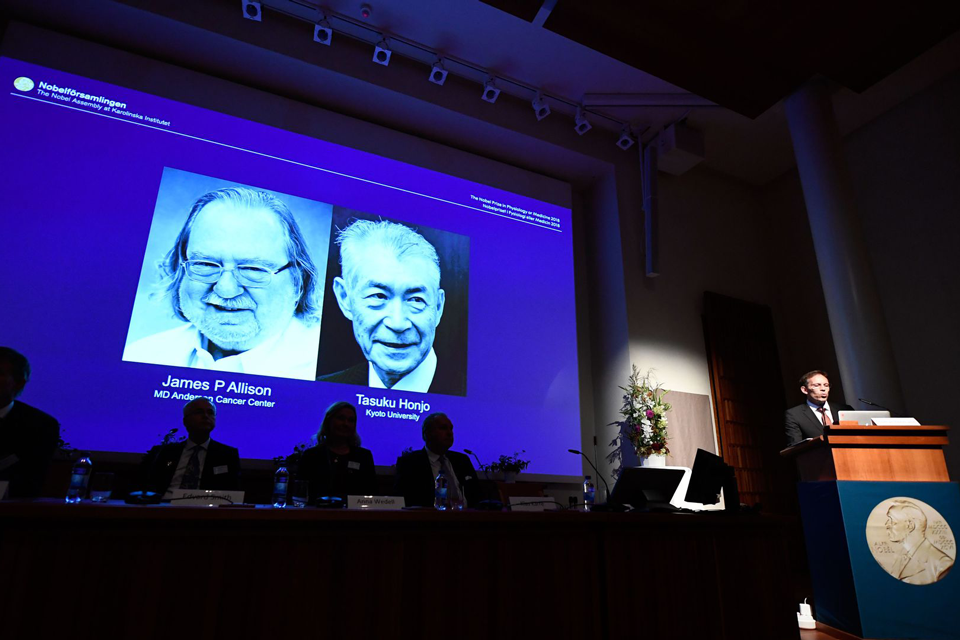 By opening a way for the immune system to attack tumours, two scientists revolutionised cancer care and won a Nobel Prize. Here is why their discoveries matter and how patients are already feeling the benefits.

So, what’s the big deal about these two? In different ways they managed to beat cancer’s meanest trick, which is its ability to stop our natural defence from fighting it. They opened the way for long-awaited therapies that have already saved many patients – heard the story of the woman who beat cancer with only weeks to live? (Read the science)

Wow, what was the treatment? Something called checkpoint inhibitor therapy, based on both of the Nobel laureate’s discoveries. They found that T-cells, the footsoldiers of our immune system, don’t attack tumours because they don't see them as invaders. Cancer plays a trick by pressing the brakes, or checkpoints, on T-cells. By stopping this, we let T-cells destroy tumours – and this works against several types of cancer. (Read more)

And they both found these checkpoints? They did, although different ones. Allison found a protein sitting on T-cells, called CTLA-4. He first managed to switch off this brake in the 1990s and cured sick lab mice. In 2010, he achieved spectacular results, by knocking out late stage melanoma in human patients during a trial. (Read his original paper here)

What about the other discovery? While the Texan was busy with CTLA-4, Honjo, working in Japan found another immune cell brake, called PD-1. Blocking it also lets T-cells go to work against tumours. In a 2012 study he reported that cancer retreated from patients who were considered untreatable before. (Read Honjo's paper here)

So why did both get the Nobel? Because both theories helped push immune checkpoint therapy into the mainstream making survival possible for new of groups of patients. Although anti-PD-1 therapy works better against lung and renal cancer, combining the two methods can be even more efficient, for example against advanced melanoma, the deadliest form of skin cancer. (Find out more)

Has there been any progress since Allison and Honjo? Yes! An example is CAR T-cell therapy. This involves modifying patients’ T-cells in the lab and re-planting them in the body to seek out tumours. Scientists combined this with viral and drug therapy against pancreatic cancer, where checkpoint inhibitors are not enough. Other teams enabled checkpoint inhibitors against prostate cancer using inflammation-causing bacteria.

So, we can say that although the battle is not over yet, the Nobel laureates have turned cancer from a death sentence to a treatable condition for many people.

The woman who just wanted to see her son graduate

In 2001, Sharon Belvin, probably weeks away from dying of melanoma, walked into a clinic and agreed to take an experimental drug, ipilimumab, one of the early checkpoint inhibitors.

She did not expect much, just wanted to live a month or so longer and see her son graduate from high school.

Six months later she was cancer-free and now has run half-marathons. This was the beginning of cancer immunotherapy, with ipilimumab licensed in the US only 10 years later.

A similar drug was given to ex-president Jimmy Carter, who was dying from metastatic melanoma in 2015. The therapy cleared out the tumours from his brain and liver, and many people have since referred to the treatment as the “Jimmy Carter drug”.

COVID-19 FAQ: Can monoclonal antibodies help keep COVID-19 in check before we have a vaccine?
6 tools that will help you convert and analyse website visitors
COVID-19 FAQ: can we block the destructive ‘cytokine storm’ that kills critically ill patients?